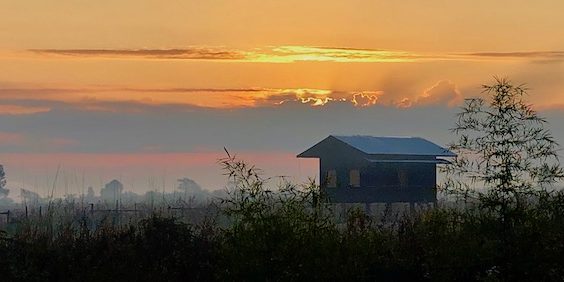 The Covid virus that used to seem under control, is now spreading and seems uncontrollable. Every day the number of patients is increasing rapidly. The government has announced that all schools must be closed until further notice. So far God has protected us and no one has contracted this virus. Despite the shutdown and churches not being able to meet, our ministry has continued to grow and we have had several baptisms. The house parents are teaching school lessons to the children and keeping them busy.  During the week we (Khaw, myself, and assistant pastor Zi Pong) try to visit homes, share the gospel, and pray for the people we meet.  On Sundays, we rotate homes and give communion to the believers. I also performed 2 funerals for believers. These are great opportunities to share the gospel and give testimony to the lives of the departed and the hope they had in Christ.

One evangelist that we support is Win Soe.  He and his family are ministering in Kyauk Tan village, Saggaing division.  When he was a Buddhist, he became interested in the concept of generations.  He traced the names of ancestors as far back as he could. This led him to question, “Who were the first father and mother?”  But, no one could answer his question.  Buddhists believe in reincarnation, so there is no beginning and no end in their religion.  He was introduced to Christ by a preacher in his village and he found the chronology in the Bible and he realized that it made sense.  Because of this, he accepted Jesus Christ as Savior and Lord.  As soon as his family heard that he got baptized, they disowned him.  However, he did not give up his faith and instead came to the Myanmar Bible Institute.  During the years he was in Bible School, I was one of his teachers. Despite feeling lonely, he kept studying and graduated. Now he is a good preacher.  When he first started his ministry work, he did not get any support and struggled to have enough to eat. When he was very desperate, he would ask his parents to help, but his parents would say to him, “If this God you accept can do anything, why doesn’t he feed you?” We have been supporting him for three years now and he is doing excellent jobs in the ministry, and he is ministering at two different churches. Recently we were able to bless him with a much needed new motorcycle. God has supplied his needs through our ministry! Praise God!

The Bridge in Putao

In 2003 we planned to buy land to build an orphanage in Putao, but some relatives came and said they would not agree to this.  They believed that the land was cursed because several family members who lived there died from sickness or accidents. People in Myanmar can be very superstitious (even some Christians). We wanted to purchase the land because it was adjacent to my mother’s land and it would meet our needs. We trusted our Almighty God and bought that land.  We then invited local pastors to join with us and prayed on that land to cast out the demons and to invite the Holy Spirit to dwell there. We built the Putao Orphanage in 2004 and my sister was one of the house parents and she and her husband and 2 daughters (5 year old Shin and 2 year old Anin) lived next door in my mother’s home.  All went well for several years, until a very heavy monsoon rain came. It rained heavily all night and on through the morning. Normally my sister Tangshing Nin would walk with the girls to the orphanage and would cross over a small stream on a little bamboo bridge (pictured above left). But on this morning, my sister left her daughters at home. The 2 year old decided to follow her mother on her own and tried to cross over the flooded bridge, but the water swept her down the stream.  The stream had become a fast moving river! The water took her so fast that they never found her body! My sister’s heart was broken and torn.  We tried to encourage her as much as we could, but she wanted to be alone and cried day and night. She refused to eat and refused to hear any words of support or encouragement from others.  We prayed earnestly for her and the Lord answered our prayers.  After several months she returned back to normal and after about two years, she got pregnant again and had a healthy baby boy.  This little boy, Pong, is now 3 years old and he fills their life with great joy! (pictured above right on new bridge).  Some people still think we lost our niece because of the cursed land, but we know we did the right thing and we do not regret it. We believe the power of the blood of Jesus Christ is more powerful than the demons.
We thank you for supporting us so we could make a new safe, permanent concrete bridge possible.  Please continue to pray that the Lord’s protection will always be there. Thank you to those who gave special support to have this bridge rebuilt.

We recognize that this is a difficult time for many people around the world.  But, we also recognize that many are continuing to prosper and are able to provide additional support for Kingdom causes and the work of reaching the lost with the Gospel. If you can help during this time of pandemic, we would certainly appreciate it and as always promise that all funds given will go directly to the mission.  Administrative costs are provided as a ministry of Real Life Church in FL and we greatly appreciate all they do!

May God bless you more and more!
In Christ’s love,
Judah and Khaw Tangshing

Mission Myanmar is a 501C3, and board members are:  Judah Tangshing, Suzanne and Jeff Kosik, Mike Shelly, Michael Chambers, and Joe Snyder. Mission Myanmar is administered by the Global Outreach Team at Real Life Christian Church.  100% of support goes directly to the mission. Transaction fees cover the cost of wiring the money to Myanmar and you have the option to help cover those costs when you give your support online.